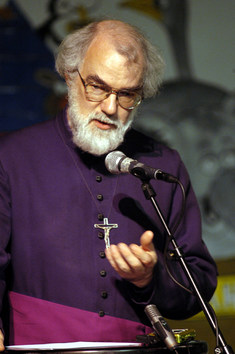 Williams, the spiritual leader of the worldwide Anglican Communion, claimed to believe "there's no problem about a gay person who's a bishop," as long as the bishop in question remains celibate.

"It's about the fact that there are traditionally, historically, standards that the clergy are expected to observe," Williams said this weekend. "So there's always a question about the personal life of the clergy." Celibacy is not a requirement for straight clergymen and women.

Tatchell isn't buying Williams' face-saving publicity, and blasted the Archbishop yesterday, saying, "Rowan Williams is inconsistent," he said. "Although he says he is willing to accept a gay celibate bishop, he blocked the appointment of the celibate gay cleric, Jeffrey John, as Bishop of Reading."

In addition to blocking that ascension, Williams imposed sanctions on an American Episcopal Church for ordaining a lesbian, Mary Douglas Glasspool, as an assistant bishop.

Tatchel went on to accuse Williams of simply playing politics with the Church: "In his calculation, church unity is more important than the human rights of lesbian and gay people," Tatchell railed. "An Archbishop is supposed to be a moral leader. On gay human rights, Rowan is a follower. He's an appeaser of homophobes. He'd never make similar compromises over racism within the church. Why the double standards?"