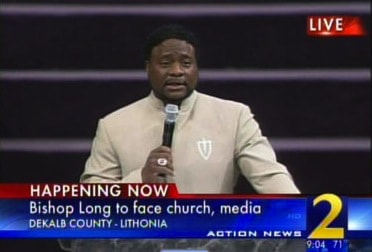 We've been waiting days for Bishop Eddie Long to respond to the sex scandal he's found himself in over the past week.  He finally broke his silence this morning when the took to the pulpit clutching an iPad and delivered a sermon in which he denied the recent accusations from four young men. Apparently, he won't be resigning from his position anytime soon. Said Long:

"We’re here today and every Sunday morning. And I’ll be here next week. First of all let me thank you on behalf on my wife my family for all of your support and prayers…I realize many have been waiting on me to say something."

Some other choice quotes from the sermon related to the scandal but not one outright denial of the allegations:

"There have been allegations and attacks made on me. I have never in my life portrayed myself as a perfect man, but I am not the man being portrayed on television. That’s not me. That is not me…I am not going to try this case in the media, it will be tried in the court of justice and decided in the court of justice.  Please hear this: I’ve been accused. I’m under attack. I want you to know as I said earlier I am not a perfect man… But this thing I’m going to fight. I feel like David against Goliath, but I’ve got five rocks and I haven’t thrown one yet."

According to the AP, "About 100 people waited at the doors of the church more than an hour before the first service. Some held signs of support, while others prayed for their embattled leader. A small group sang the hymn 'White as Snow' while outside." During his talk, the congregation showed their support of Long with resounding cheers and applause.

A transcript of the entire sermon is here or watch video of it, AFTER THE JUMP.