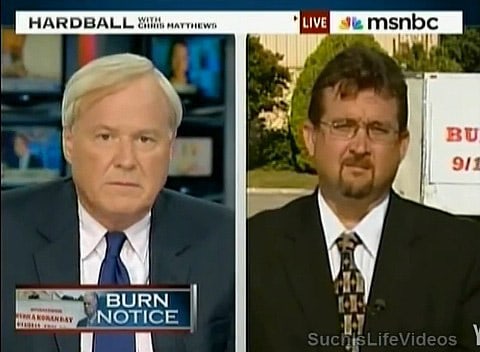 Chris Matthews talks to Pastor Wayne Sapp, Terry Jones' colleague at the Dove World Outreach Center, about his plans to burn the Quran on 9/11.

Gaineville, Florida Mayor Craig Lowe, who himself was the target of anti-gay attacks by Jones' church during his election, says the town has rejected Jones:

"What Mr. Jones' so-called church is doing is definitely not representative of Gainesville," says Mayor Craig Lowe, who has declared Saturday "Interfaith Solidarity Day" in his city, for clerics, students and residents to plan peaceful events while the Dove folks torch a couple hundred copies of Islam's holiest book. "This actually presents us with an opportunity to project who we really are."

MSNBC: "The president called it a 'stunt' and exhorted Jones to 'listen to those better angels' and call off the protest this weekend. 'If he's listening, I hope he understands that what he's proposing to do is completely contrary to our values as Americans,' Obama said. 'That this country has been built on the notion of freedom and religious tolerance.' The president also said Jones' plan, if carried out, could serve as an incentive for terrorist-minded individuals 'to blow themselves up' to kill others. 'And as a very practical matter, as commander in chief of the Armed Forces of the United States, I just want him to understand that this stunt that he is talking about pulling could greatly endanger our young men and women in uniform,' the president said."