Note: you may need to turn up the volume. Transcript via Think Progress:

ELEVELD: But senator, that’s not…

MCCAIN: That is the fact! That is the fact. Now ma’am, I know the military very well, and I know what’s being done. And what is being done is that they are not seeking out people who are gay. And I don’t care what you say, I know it’s a fact.

ELEVELD: It’s not what I say.

ELEVELD: Senator, just to make sure…

MCCAIN: Just to make sure. We do not go out and seek out and find out….

ELEVELD: There are documented cases…

GEIDNER: It is the case of Mike Almy, Senators.

GEIDNER: But it is the case that it’s happening, Senator. 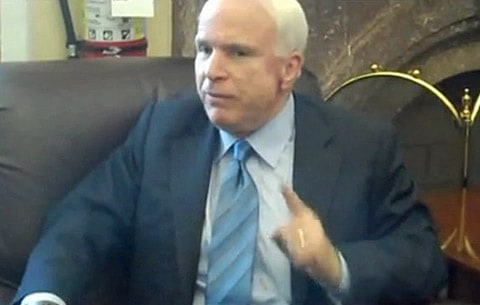 The Wonk Room reports on a meeting between Senators John McCain and Lindsey Graham and a group of journalists immediately following the Senate filibuster of the Defense bill, which effectively stalled DADT repeal in the near term.

In a dialog with The Advocate's Kerry Eleveld and MetroWeekly's Chris Geidner, McCain insists, in what can only be described as a hissy fit, that the military does not "seek out" sexual orientation, despite evidence to the contrary.

"In fact, as Almy explained in testimoney before McCain’s own committee (Senate Armed Services): 'In Iraq, during the height of the insurgency, someone in the Air Force ordered a search of my private emails solely to determine if I had violated 'Don’t Ask, Don’t Tell', and to gather whatever evidence could be used against me.' 'I was relieved of my duties, leading nearly 200 Airmen, my security clearance was suspended and part of my pay was terminated. Even as my commander was relieving me of my duties, he assured me this was in no way a reflection of my performance or my abilities as an officer,' Almy testified."

Video and transcript, AFTER THE JUMP…