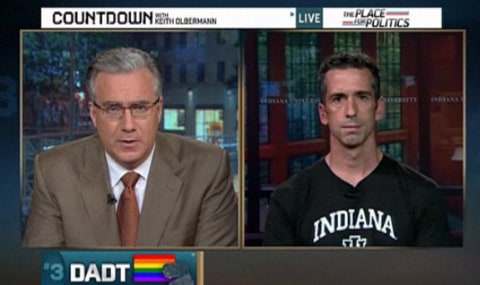 Keith Olbermann spoke with Dan Savage about McCain's lies and tantrum over the military "seeking out" orientation with regard to DADT, and the hate message ("all faggots must die") left on Joe.My.God following the DADT cloture vote.

In related news, Chambliss office says the slur is being investigated and is still not sure who is responsible:

"in a statement, Chambliss' office said it has not discovered exactly who was behind the slur, and has turned the matter over to the Senate sergeant at arms. The office employs 42 people. 'The [sergeant at arms] has worked side by side with our personnel to determine whether the comment in question emanated from our office. That appears to be the case,' an unsigned statement from Chambliss' press office read. 'There has not been a determination as to who posted the comment,' the statement read. 'That part of the review is ongoing, and is now in the hands of the Senate sergeant at arms.' Spokeswomen for Chambliss did not return a reporter's phone calls or e-mails seeking more details."