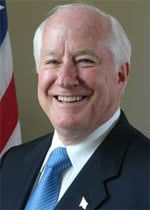 From the White House bio:

"Jim Kolbe is the Senior Transatlantic Fellow at the German Marshall Fund. He is as an adjunct Professor in the College of Business at the University of Arizona and a consultant with McLarty Associates. He currently serves on the Advisory Board for the Export-Import Bank and is co-chair of the Transatlantic Taskforce. He formerly served in Congress representing southeastern Arizona, from 1985 to 2007. Mr. Kolbe has received numerous awards and tributes, including the George Marshall Award for Distinguished Service from USAID, and the Order of the Aztec from the President of Mexico."