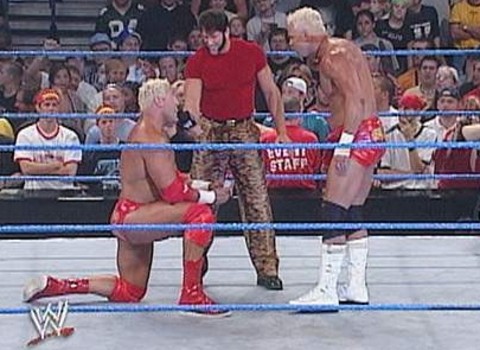 Linda McMahon, the Republican gubernatorial candidate from Connecticut, has recently been avoiding the fact that she was Chair of the World Wrestling Entertainment, her family’s business.

Though that tidbit came up in the primaries, it’s been pretty much a non-issue in recent weeks. Well, until now, because a group called Mothers Opposing McMahon began running an ad showing McMahon’s husband demanding a woman “bark like a dog” in the wrestling ring. They call Linda McMahon “a slap in the face to Connecticut women.”

ABC’s Christiane Amanpour broached the subject this weekend, when she asked the candidate how she feels about such displays in wrestling. McMahon worked around the question by saying WWE has grown up: “WWE programming has changed from being TV14 over the years, which that’s the time you were talking about. It was called the Attitude Era, into now being PG, rated by the networks as PG. I’m happy with the content today.”

McMahon then insists that WWE is a Constitutional right: “From an entertainment point of view, you either elect to go to a movie, or you elect to watch a program, so I’m a strong proponent of First Amendment rights.”

In light of this kinder, cuddlier wrestling culture of which she speaks, it’s a good time to revisit one of the WWE’s less charming moments: the 2002 storyline in which “gay” wrestlers Billy and Chuck were meant to wed. The scene, designed exclusively for ratings, ends with the duo admitting the ruse and opposing wrestlers attacking the “gay” tag team, as well as McMahon’s daughter, Stephanie.

It’s so terribly idiotic and campy, one almost understands how wrestling has grown into a multibillion dollar industry. Almost…

A highlight from the wrestling world, and a low blow for responsibility in programming, AFTER THE JUMP.