The Limbaugh-related discussion starts at the 4:55 mark. 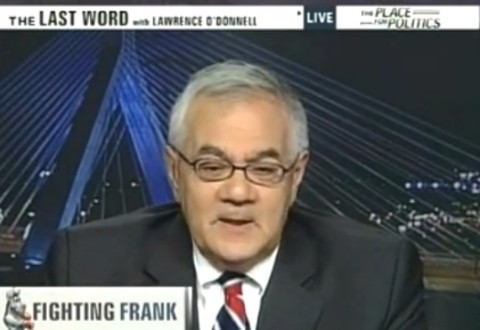 It all began last week, when Limbaugh referred to Frank, chairman of the House Financial Services Committee, as the "banking queen" and played the song "My Boy Lollypop," with bonus slurping sounds, while discussing the incumbent Democrat, who's up for reelection.

Frank found the entire thing offensive, and told MSNBC's Lawrence O'Donnell last night that the incident qualifies as a "vicious" and "homophobic" attack, one that's designed to help Frank's opponent:

[Limbaugh] just launched this very, even for him, vicious, homophobic attack.

My opponent, the Republican, Sean Bielat, who‘s running against me, told “The Wall Street Journal,” before they told me today, that he raised a lot of money from out of state.  He was very explicit earlier this year.  He said if I can‘t get help out of state I can‘t win this thing.  He‘s helped by the right wing media, by Hannity and Limbaugh, by FOX News.

Watch Frank's remarks, AFTER THE JUMP.