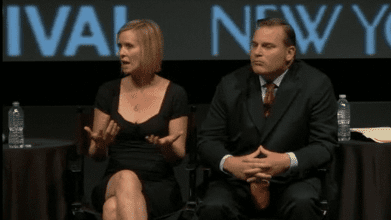 The Sex & the City star made a very clear, coherent counter argument to Brown's view that, by seeking marriage equality, gays and lesbians wish to completely redefine marriage. Said Nixon:

"I want to say to the gentleman to my left, gay people who want to marry have no desire to redefine marriage in any way. When women got the vote they did not redefine voting. When African-Americans got the right to sit at a lunch counter alongside white people, they did not redefine eating out. They were simply invited to the table…We have no desire to change marriage. We want to be entitled to not only the same privileges, but the same responsibilities as straight people."

Brown must think this is just more gay trickery at work. Watch the clip of Nixon's well-received comment, AFTER THE JUMP.

Also, Broadway World has photos from the panel.