Does 'Sharia Law' Have A Place In American Politics? - Towleroad Gay News

“I am deeply distressed that you have been misled about our community and the way that we conduct our affairs,” wrote O’Reilly. “I am afraid that many share the perception that Muslims have only recently immigrated to this area and are imposing their culture on our region… Muslims have been practicing their faith in our community for almost 90 years without incident or conflict.”

But the specter of Sharia law swings both ways: Sen. Jim DeMint’s was roundly criticized earlier this month for saying that sexually active single women and gay people shouldn’t teach in schools. Opponents compared his remarks to, yes, Sharia law, and even the Washington Post described his comments as “DeMint’s Sharia Law.” Along the same lines of using Sharia law to hammer the right wing, there’s Democratic Rep. Alan Grayson’s ad comparing his opponent, Dan Webster to the Taliban.

Grayson’s commercial was panned for taking Webster’s words out of context, yes, but the message still heard loud and clear: right wing conservatives like Webster, who pals around with “gay regulating” Christian nationalist David Barton, have politics that are just as oppressive as those espoused by Islamic fundamentalists, the very same people conservatives criticize.

Sharia law has, for better or for worse, become a major player in American politics. It’s become rhetorical pawn, and can employed by either sides of the ideological divide to stoke xenophobic fear or to highlight radical, oppressive politics that single out women and gay men. And, with election day nearing, voters need to decide not whether they should be worried about encroaching ‘Sharia law,” but how the concept should be used on American political field, if at all. 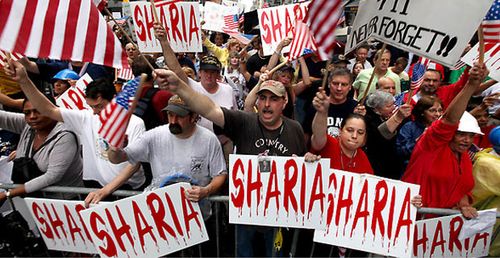 Sharia law, or the idea of it, has been playing an increasingly important role in this year’s midterm elections, thanks in part to plans for a Muslim community center near Ground Zero. Some of the references to Sharia law have been hateful, while others illuminating, but all show that this concept moves in mysterious political ways.

Conservative leaders such as Newt Gingrich have warned that Sharia law is insinuating itself into our beloved American institutions. “We should have a federal law that says sharia law cannot be recognized by any court in the United States,” he said last month, while discussing the so-called “Ground Zero Mosque,” which he called “an effort to impose Sharia law.”

“We’re talking about a militant terrorist situation, which I believe isn’t a widespread thing, but it is enough that we need to address, and we have been addressing it,” said Angle, after being asked about “Muslims taking over the U.S.”

“Dearborn, Michigan, and Frankford, Texas are on American soil, and under Constitutional law. Not Sharia law. And I don’t know how that happened in the United States,” she opined. “It seems to me there is something fundamentally wrong with allowing a foreign system of law to even take hold in any municipality or government situation in our United States.”

Meanwhile, a group called “Veterans Against Jihad” recently threw itself into the crusade to “awaken American Citizens to Islam’s Jihadist religious mandate.” Clearly these views are incendiary, dangerous, and, as Dearborn Mayor John O’Reilly Jr. said in a letter to Angle, entirely off base.