Andrew Belonsky: Why are you running? Why public service?

Krystal Ball: It's a good questions, because I never thought I would run for Congress in a million years, but I started really thinking about running for the seat after my daughter was born. I really started to think about what kind of world, what kind of country we are going to pass to our kids and our grandkids, and that applies to civil rights, it applies to the kind of education system, the environment.  After thinking about it for a long time, and thinking about the particular Representative we have here, who's just a far right, "family values" conservative Republican, I decided, "Somebody has to challenge this guy," and I decided to run.

AB: You just touched on this, but one of the things that's very explicit on your website is that you do fight for equality. You've gotten a lot of positive attention from LGBT press and pundits, and you were at the Netroots Nation conference, which is where I saw you, so I'm curious — my first question about that is, "When did you first know about gay people?"

KB: [Laughs] You know, actually, I was a dancer growing up. I was a ballet dancer and also I was trained in jazz and other forms of dance, and I had a jazz teacher from the time I was 9-years old who I loved and adored, and he was the first person that I knew was gay. Later, when I was about 14, he died of AIDS; my ballet teacher didn't tell us that was what happened, my mom didn't tell us, but we all kind of knew. He had been sick for a long time, and that really was my first experience with knowing someone and being close with someone who was gay.

AB: Was there ever a point in your life when you didn't think that gay people should be able to get married or have other equal rights?

KB: I don't think there was ever a point in my life when I thought that, and I do think that's something that's a little different in our generation to older generations. I could never understand why gays and lesbians shouldn't have equal rights to everyone else. It just makes no sense to me.

AB: Do you find that makes you an outsider in your community?

KB: No, actually, I don't. I would say that I'm probably a little bit further along on this issue than a lot of people in my district, in particular older people, but most people in this district tend to be Libertarian, with a "leave us alone, and we'll leave you alone" kind of an attitude. While they're not fighting the fight for equality, it's not their top concern.

AB: I'm glad you brought up Libertarianism. One of the things that said at Netroots that really caught my attention was the way that you approach Tea Party supporters and turn them on to gay marriage. Could you explain for how you go about convincing a Tea Partier that marriage equality is not a threat to them?

AB: The Libertarian Party last week sent out a press release urging gay Americans to vote for their party because of what they described as "battered gay voter syndrome" in the Democratic party.

KB: [Laughs] I didn't see that, but the danger there is that we're in a place now where not only do we just need the government to leave people alone, we do actually need explicit protections in the law for gay, lesbian and transgender people, like non-discrimination, fighting against bullying, those sorts of things. So, that's the only place where [the Libertarian argument] kind of breaks down.

AB: A lot of people do see such legislation or policies as government intrusion, so how do you convince them that it's not?

KB: Equality is a founding principle of our country, so if there's ever an appropriate use of government, it's certainly in promoting and ensuring equality and protecting the minority from the tyranny of the majority.

AB: Back to the Democratic party, two Senators from Arkansas, Blanche Lincoln and Mark Pryor, voted against the Don't Ask, Don't Tell repeal. How do you approach your party peers who don't stand for equality?

KB: You know, it's very hard for me to understand why, at this point, you wouldn't support equality, so it's a hard conversation for me to have. I really think not only is it the right thing to do, but it's an area that we have actually in a lot of ways won the messaging on, and it's, to me, a lack of courage and a lack of leadership to vote against equality for the LGBT community.

AB: So you would work with such Democrats, if you were elected to the House?

KB: Absolutely. And I just can't understand how — all of us at this point have a friend or a relative or know someone who is gay, and I can't imagine looking those people in the face and saying, "No, I don't think you should have the same rights that we all enjoy." But, absolutely, I would be doing a lot of arm twisting and fighting and advocating for equality. It's one of these areas where history is definitely on our side and the facts are on our side. It's, to me, such an obvious moral issue that I'm happy to take up that argument anytime.

AB: It seems to me that Virginia may be at a tipping point right now when it comes to social issues. Of course we have Attorney General Ken Cuccinelli telling universities that they can discriminate against gay, lesbian and transgender people, but not even Governor Bob McDonnell agrees with that. Speaking with your would-be constituents, do you sense that people's mind are in fact changing?

KB: Yeah, and I think another way of framing things for more typically conservative people is as an economic issue. Virginia has Fortune 500 companies, many of them are leading the way in terms of non-discrimination policies, and for them it just makes good business sense: you want to attract the best people, whether they're gay or lesbian or straight or anything else. If you want to have the best workers and the highest quality talent, why would you want to discriminate against individuals so that they're less likely to work at your company? It's the same thing for states that enshrine discrimination against the LGBT community in their legal systems; why would someone want to live in your state? There are a lot of very successful, very productive people who happen to be LGBT and we don't want to turn those people away from our state. We want them right here in Virginia creating jobs and contributing to our economy.

AB: Is there anything else that you would like gay voters to know?

KB: I just want people to know that I would not have run for this seat if I didn't think I could advocate for the principles I believe in and this is something I believe in really deeply. I have a young daughter, she's two-and-a-half, and who knows if she'll be a lesbian when she grows up, i just have no idea at this point, and I will fight hard to make sure that everybody's child, that everybody has the same rights in this country. It's just a matter of fairness. It's a matter of equality, and it's something that I will never, ever compromise, because to me it's such a matter of right and wrong. 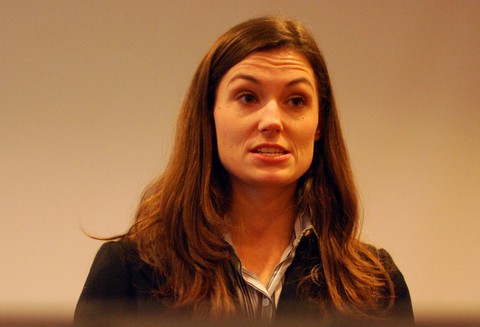 Democratic Congressional candidate Krystal Ball never thought she would go into politics. After seeing her Congressman, anti-gay Republican Rob Wittman, in action, however, the Virginia-based mother knew she needed to get involved and change the game, especially with regard to LGBT equality.

I first met Ball, who's only 28, over the summer, at the Netroots Nation conference. Her approach and experience were impressive, to say the least, so I recently rang up her campaign and had a short, yet telling, conversation with the Virginia Congressional hopeful.

AFTER THE JUMP, Ball discusses how she turns Tea Partiers onto same-sex marriage, why government does indeed need to step in for equality and how Democrats who don't stand for gay rights show a "lack of courage."