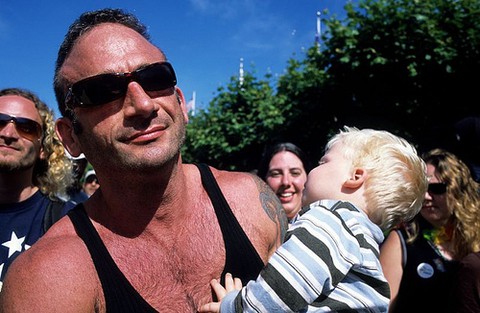 Social conservatives often claim that marriage equality will destroy "the family." Turns out, however, that the majority of Americans see no inconsistencies between same-sex relationships and the familial concept.

The Constructing the Family Surveys, put out by a variety of U.S. universities, shows that over half of the nation view same-sex couples and their children as a "family," and the pace of change has been quite impressive:

When the researchers reviewed the first round of survey results in 2003, they found that about 41 percent of the respondents supported gay marriage, yet 53.6 percent agreed that two men living with a child constituted a “family,” and 55 percent said the same thing about two women living with a child. By 2010, not only did a majority (52 percent) say they were in favor of gay marriage, but the proportion who believed that gays living with kids are families had grown to 68 percent.

Indiana University professor Brian Powell points out how fast people's minds have changed: "Social change usually occurs at a glacial pace. What we’re seeing is a very rapid shift in people’s views of who they consider to be a family.” After a week of distressing news and deaths, this survey is a breath of fresh air.