One of the bombs found in two cargo planes last week was addressed to a small synagogue in Chicago that caters to the LGBT community. 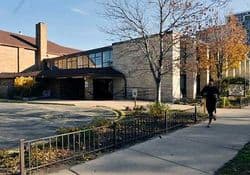 We are somewhat alarmed and somewhat disturbed," said Lilli Kornblum, co-president of Or Chadash, a North Side congregation of about 100 members. Or Chadash shares space with Emanuel Congregation at a synagogue on North Sheridan Road. Emanuel's rabbi said Saturday that he had been informed that more than two synagogues were targeted.

Rabbi Michael Zedek said he was told by a person of "considerable importance and reliability in the larger and Jewish community that there were four synagogues targeted, not two."

"He wanted to be assured that our security plan was in place," Zedek said of his source. "He told me, 'I've got good news and I've got bad news. The good news is Emanuel Congregation was not part of the four. The bad news is Or Chadash is.'"

Most peculiarly, the synagogue's website had recently been visited a number of times by someone from Egypt. Said Zede: "What I was told this morning by the person who keeps our website current is that when she was checking to see how many hits we'd been getting recently, and this is before what occurred on Friday, to her surprise we had 83 hits from an address in Cairo, Egypt. It does assume a greater interest in light of what happened.''

Meanwhile, US officials announced today that a woman in Yemen has been arrested in connection with the bombs.