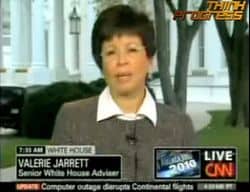 Said Jarrett to American Morning: "You know what, the Justice Department is required to defend the law of the land. Believe me, we wish there were another way because the President has been so clear. And I think there are many members of the gay community who actually understand this and who are work with us to try to put pressure on Congress to repeal it. It’s clear at that vast majority of American people think that it should not be the law. And we are determined to have Congress revoke it. But we have to go through that orderly process."

In related news, an AP article posted this morning attempts to explain why White House lawyers are fighting to keep the policy in place even though Obama says he wants it repealed:

The tradition flows directly from the president's constitutional duty to take care that the laws are faithfully executed, says Paul Clement, who served four years in President George W. Bush's administration as solicitor general, the executive branch's top lawyer at the Supreme Court.

Otherwise, Clement says, the nation would be subjected to "the spectacle of the executive branch defending only laws it likes, with Congress intervening to defend others."

Another AP article revives many of the ugly conservative talking points on the issue:

"Will straight and gay troops have to shower next to one another?…If the military lifts the ban suddenly, would there be attacks on gays? Would religious parents, coaches and teachers who oppose gay rights persuade young recruits not to enlist? If a platoon member says he is gay, would his comrades still support him, or would there be infighting? Conway, the Marine Corps commandant, claims, by his own informal survey of the force, some 90 to 95 percent oppose letting gays serve openly. 'We recruit a certain type of young American, pretty macho guy or gal, that is willing to go fight and perhaps die for their country,' he said."

Watch Jarrett defend the DOJ and Obama, AFTER THE JUMP…