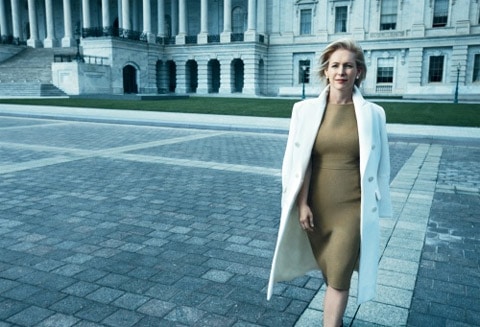 Senator Kirsten Gillibrand (D-NY) is anointed as Hillary Clinton's heir by Vogue, which discusses, in part, her support for lgbt issues:

This brings up a fascinating thing about Gillibrand: her very correct gay politics. She is unequivocally supportive of same-sex marriage and has been one of the loudest voices on the effort to repeal Don’t Ask Don’t Tell. Should she prevail on November 2, she will, at 43, be the youngest elected member of the Senate. (“She probably has the least senatorial air of any senator I’ve met in eleven years in Congress,” says Weiner.) But her being a post–baby boomer—at the leading edge of the next generation—only partly explains why she is so unconflicted about an issue that seems to trip up even the most progressive politicians, the Clintons and Obama included. I ask her where her passion on this issue comes from, and her answer goes a long way to explaining who Gillibrand is and where she comes from.

“My mother had a lot of gay friends,” she says, in a girly voice that reminds me of Renée Zellweger’s, “and they were very much part of our close circle. And I cared a lot about them. One of my mother’s friends’ partners died of AIDS early on, and that affected me. This man was so interesting, so engaging, was always superkind to me. One of the most handsome men I’d ever met. And it was just such a loss for a young girl to see someone die so young.”