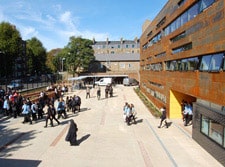 Pupils learn about wartime code-breaker Alan Turing, who committed suicide after he was prosecuted for his homosexuality and forced to choose between prison or taking female hormones. Gay authors Oscar Wilde and James Baldwin and artist Andy Warhol also feature in the lessons.

Music teacher Elly Barnes said she developed the lessons with colleagues five years ago, after she became concerned about pupils using "gay" as a derogatory term. Now the school plans to extend the scheme by teaching hundreds of teachers how to "educate and celebrate" being gay.

Ms Barnes aims to "eradicate homophobia from all schools" by giving staff the confidence and resources required to tackle the prejudice.

"Many schools haven't even begun to deal with homophobia," she said. "Some still think being gay is illegal in parts of the country. By looking at famous LGBT [lesbian, gay, bisexual and transgender] people in history, we've changed opinions and we have had a number of pupils come out.

"We have also changed the language used in the school. I used to hear the word gay used all the time as a derogatory term. Now we hardly hear it."

Unfortunately, attempts to try these kinds of things in America have been met with cries of "indoctrination!" by Evangelicals.