Other reports vary, but not greatly:

College junior Sabrina Bernstein, who attended the party with the student, echoed the student's account of the altercation and of the approving reaction of those who realized what was going on.

“[Someone] said something along the lines of ‘Good, now we got that taken care of,’” Bernstein said.

The Sigma-Nu chapter president told the paper that they are taking the incident seriously:

“We’d like the Emory community to know that we are taking this allegation very seriously. We have reviewed the limited information made available to us in an effort to learn as much as we can.”

The statement refers to the alleged victim as “an uninvited Emory student [who] was not known by anyone who lived in the residence.” The statement continues on to say that Smith was asked to leave as a direct result of the altercation.

“At this point,” the statement concludes, “we believe this to be an issue of personal, not fraternity, conduct.”

A commenter claiming to be Adam Smith, the alum responsible for the ejection, left a comment defending his actions on the Emory Wheel site:

"Further there was not any 'approving reaction' from the crowd at the party for me putting this kid in a headlock and throwing him out, nor was I walking around bragging to other people that I just kicked 'this faggot kid' out of the party, high five bro…Really?? This whole dumb event occurred because I was drunk and thought it would be funny to throw someone out to the wrath of the huge security guard at the door, and the most ridiculous person that naturally stood out to me was this Wizard dressed kid. I purposely egged him on a little bit, he snapped back at me, and I threw him out.
So chalk this up as me being a drunk asshole, a frat guy with too much testosterone, or whatever you want to call me I really don't care. I just want everyone to know that that's literally all it was, that's the honest truth. I'm not some ignorant bigot looking to bash homosexuals, so please don't think that."

Correction: A photo published here earlier was of the wrong Adam Smith. We apologize for the mistake, and want to note that the Adam Smith depicted in the earlier photo contacted us, and says he supports gay rights.

Emory University's student newspaper, The Emory Wheel, is reporting on an incident over the weekend in which a student was "forcibly ejected" from a Sigma-Nu frat party by his neck after it was discovered that he is gay. 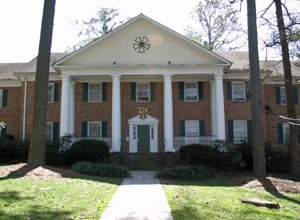 According to the alleged victim, his admission that he was gay instigated his forceful removal from the premises. His ejection was accompanied by anti-gay slurs and followed by what he termed “affirmative cheering” from many in attendance.

The student, who has not yet filed a police report and wished to remain unnamed for this story, attended the party at Sigma Nu’s off-campus house with multiple friends after first venturing out to Eagle Row. His particular choice of costume — a lime-green jacket, red pants and a wizard hat — meant that he stood out immediately among the crowd at the house, the student acknowledged.

“At first, when I walked into the party, some people were taking pictures of me and appreciating, if you will, what I was wearing,” he said.

About half an hour later, however, another attendee — confirmed by multiple witnesses as recent alum Adam Smith (’10C) — took the student’s wizard hat and began questioning him.

“This guy approached me and asked why I was wearing my hat. … I said that I like the hat, just as you like your pink shirt. He then asked me if I was gay, and I said I was. He then started choking me with his elbow and put me into a head lock, and he dragged me out of the party by my neck.”

After the student was allegedly dragged the approximately 10 to 15 feet from the house’s common area to the door and thrown onto the front lawn, Smith was overheard telling other attendees “Hey, this kid’s a f****t.”

Previous Post: « London School Claims to Have Eliminated Homophobic Bullying by Teaching Kids About Gay People
Next Post: Whoopi: ‘If You’re Not for Gay Marriage, Don’t Marry a Gay Person’ »