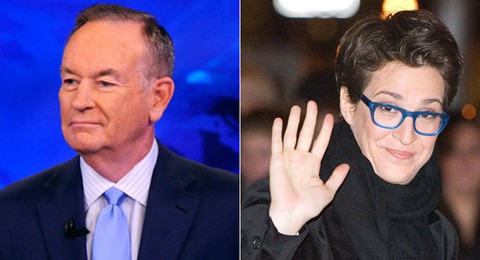 Rachel Maddow and Bill O'Reilly's feud flew off the television and into the pages of New York magazine, where journalist Gabriel Sherman relays one of Maddow's more candid remarks about her journalistic rival, whom she reportedly referred to as a "race-baiting f-ck."

The remark came during one of Maddow's team meetings ahead of airtime, in the midst of the Shirley Sherrod scandal. Maddow had earlier suggested the scandal was another example of the right using race as a political tactic. O'Reilly responded on his Fox News show by saying, "One NBC News loon actually said on the air that the coverage of acorn, the Black Panthers, and Ms. Sherrod was designed to make white Americans scared of black Americans. Who is sponsoring this stuff, Mad magazine?"

Maddow may joke and jest about O'Reilly on the air, but she's completely serious when it comes to making her point. The entire "race-baiting" anecdote:

Maddow thinks she’s settled on the appropriate comeback [for O'Reilly]. “I want to wear a loon suit,” she says, flashing a raffish grin. She turns to her staff and pretends to address O’Reilly as a duck. “Sorry, you really hurt my feelings, I am a loon. I’m on the Canadian dollar bill. It’s awful”—she pauses—“but you, however, are also a race-baiting fuck.”
…

[She continued,] “I have leveled a serious charge about what’s happening with making white people afraid of black people as a political tactic by political activists, by people who want to harm the administration, and by Fox News as a political organization.”

Fox News would of course object to being called a "political organization," but recent revelations that parent company News Corporation donated $1 million to the Republican-loving U.S. Chamber of Commerce make for an interesting counter-argument

Previous Post: « From Tyler Clementi’s Suicide, A Test For The Tea Party
Next Post: Volcano Daredevil Proves Earth’s Flaming Inside »