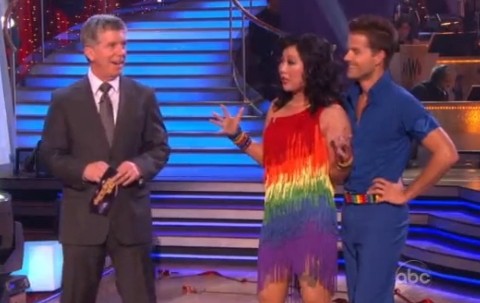 After dancing with partner Louis van Amstel to Barry Manilow's "Copacabana" in a rainbow fringe dress, the exceedingly queer friendly Cho told the audience, "The story is about having pride while people's criticizing you," and, later, "This is the gayest thing that I think has ever happened here."

"Our story is serious," she concluded. "We wanted to celebrate pride. It's a tough time for the gay community. A lot of gay teenagers have committed suicide, so we want this to end now!"

Watch Cho's performance and remarks, AFTER THE JUMP…