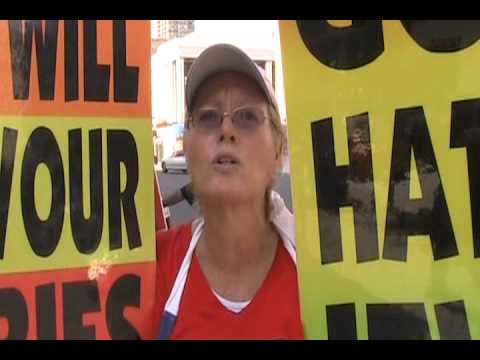 Fred Phelps and his Westboro Baptist Church catch a lot of flack for their anti-gay, anti-America, anti-everything protests. The family shouldn’t be dismissed as simple right wing nuts, though, because their politics aren’t always so different than those found on the left.

Take, for example, Margie Phelps’ remarks about Cordoba House, the so-called “Ground Zero Mosque,” which she supports. “We say we’re the melting pot, we say you get the practice your faith according to your conscience with no restraint from the government, you have that liberty. Why, against that framework, would anybody be so un-American as to suggest that Muslim Americans cannot worship their God according to their conscience,” said Phelps, who argued Westboro’s case before the Supreme Court earlier this week. Similar arguments have been made by people on the left, like Keith Olbermann.

But of course Phelps, who’s Fred’s daughter, couldn’t resist getting in a low, decidedly discriminatory blow, telling Talking Points Memo, “Now [Islam is] a false religion, no question about that, but they don’t have to agree with me on that.”

If nothing else, the Westboro Church should show us that politics isn’t always black and white: people who are you rivals on one issue may be the closet ally on another.