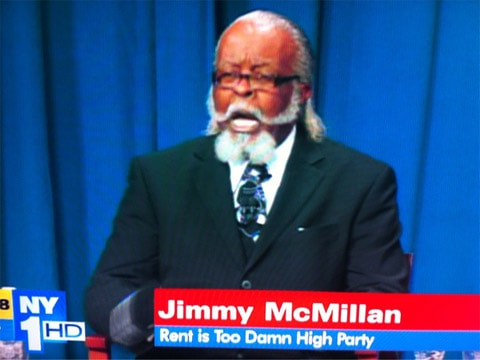 McMillan was representing the "Rent is Too Damn High Party". See a clip of his moments, AFTER THE JUMP…

Gay marriage was addressed in a lightning round. The WSJ blog has the details:

The debate moderators, for some reason, chose to limit the candidates to five-word response on the question of gay marriage. Here's where some of the candidates stand:

Paladino, who went first, misunderstood the lightning round format: "Gay marriage is an issue that’s very important to the people today," he began, before the moderator cut him off. Then, following the rules, he said, "I do not support gay marriage."

Barron cited the platform of his Freedom Party … which has not yet taken a stand on gay marriage, apparently.

The Rent Is Too Damn High Party, on the other hand, has weighed in on the issue. According to McMillan, his party would support people who want to marry a shoe.

Kristen Davis, Eliot Spitzer's madam, got in the first laugh line of the night:

The former madam denounced any increase in taxes, calling the stock-transfer tax a job killer.

"Businesses will leave this state quicker than Carl Paladino at a gay bar," she said, referring to Paladino's remarks from a week ago that were widely viewed as anti-gay.

The debate "verged on farce," wrote the NYT. Read its report here.

Watch McMillan, AFTER THE JUMP…