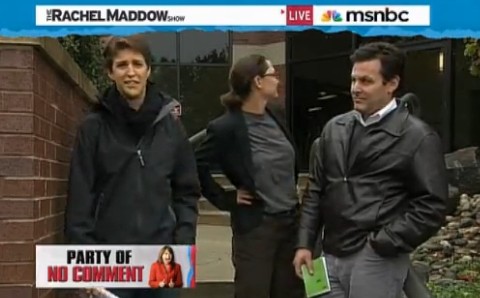 Like so many other media figures, Rachel Maddow has had some fun at the expense of surprise Senate candidate Christine O'Donnell. But just because she's made a few jokes doesn't mean Maddow isn't looking for something more serious from O'Donnell.

To that end, the MSNBC anchor, who dedicated all of yesterday's show to Delaware, and two of her producers, Laura Conaway and Bill Wolff, went to anti-gay Tea Partier O'Donnell's local campaign office,  to see if they could make some headway toward an interview, or at least get an official statement of some sort.

Sadly for Maddow and her producers, the O'Donnell campaign refused to budge an inch, and called Maddow "classless," at least. Nor is there any evidence O'Donnell will be appearing in public anytime soon.

Watch Maddow and her team work out the O'Donnell campaign's kinks, AFTER THE JUMP…