The Institute, which publishes the right-wing Claremont Review of Books, was founded in 1979 by students of Harry Jaffa, a philosophy professor who studied under neocon patriarch Leo Strauss and the author of Barry Goldwater’s famous call for “extremism in defense of liberty.” The institute praises extremism in its own right, this year bestowing its Statesmanship Award on Dick Cheney.
…
But it’s Jaffa who has shaped the culture of the Institute—so much so that Institute followers are nicknamed “Jaffanese Americans”—and one of the core values he’s inculcated is a venomous homophobia.

Sounds like O’Donnell could have been headmistress at Claremont. Perhaps people are right about O’Donnell’s fellow Tea Party member, Carl Paladino: he’s part of a broader anti-gay movement hiding behind fiscal conservatism. 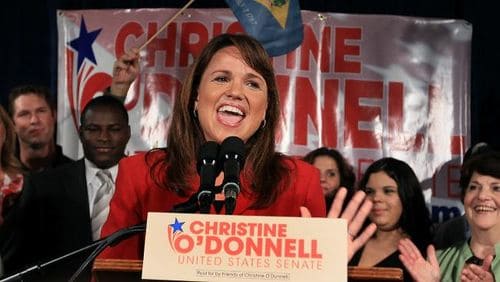 With regard to education, there were allegations that the Republican lied about attending Oxford University and Claremont College on a virtual resume, a resume her campaign dismissed as a fraud. Then, earlier this week, O’Donnell touched on the topic in a campaign commercial, thus producing even more articles about her academic career.

The press has been equally voracious in investigating O’Donnell’s bizarre sexual politics, including the idea that homosexuality is an “identity disorder” and that masturbation’s sinful.

O’Donnell’s educational and sexual politics are not mutually exclusive, however, and certainly converged during the candidate’s time as a Lincoln Fellow at the right wing Claremont Institute. The Nation‘s Kathryn Joice helps explain why, AFTER THE JUMP…