Myth #1: Gays will suddenly out themselves: Pentagon leaders appear to believe that the suspension of the gay ban entails a shift in military culture from an environment in which nobody knows who is gay, to a new climate in which suddenly the troops are surrounded by peers who advertise their sexual orientation. In fact, polls by Military Times, Vote Vets and Zogby http://unfriendlyfire.org/research/files/Military%20Polls.pdf show that between 57 to 67 percent of service members know or suspect that someone is gay or lesbian in their unit. The Zogby data reveals that even in the Marine Corps, 45 percent of Marines know or suspect someone who is gay or lesbian in their unit. Other research finds that following the lifting of a gay ban, very few additional individuals come out of the closet. The reason is that the decision to reveal one’s sexual orientation is driven by the climate of the unit, not the presence or absence of a gay ban. The bottom line is that most straight troops already knew who was gay prior to the suspension of “don’t ask, don’t tell,” and the numbers will not change significantly when “don’t ask, don’t tell” is permanently repealed. The silence we heard last week is the same silence we will hear when the ban is permanently repealed.

Myth #3: The troops care about “don’t ask, don’t tell.” Marine Corps Commandant General James Conway says that 90 to 95 percent of Marines oppose allowing gays and lesbians to serve openly, and implies that this is a hot-button issue for the Corps. In fact, four polls http://unfriendlyfire.org/research/files/Military%20Polls.pdf of service members have found that approximately 40 percent of troops oppose repeal, 30 percent support it, and 30 percent don’t know or don’t care. What’s even more important is that the percent of troops who feel strongly about the issue is low. As early as 2003, retired NATO commander Wesley Clark said “the temperature of the issue has changed” since 1993; “people were much more irate about this issue in the early '90s than I found in the late '90s, for whatever reason, [perhaps because of] younger people coming into the military. It just didn't seem to be the same emotional hot button issue by '98, '99, that it had been in '92, '93.” Statistical data confirm Clark’s point. Even those troops who oppose repeal don’t, for the most part, feel strongly about it.

Myth #4: The troops need to be taught how to interact with gays. Pentagon leaders have stated that service members require significant training to prepare for the repeal of “don’t ask, don’t tell.” There is no evidence to suggest that the Pentagon provided any training to prepare the troops for last week’s suspension of “don’t ask, don’t tell,” yet the Services appear to have adjusted to the suspension without difficulty. In 1993, the RAND Corporation concluded that the keys to successful repeal are that the military must have a single code of conduct that applies equally to everyone, and that leaders must signal support for the new policy. The military already has a single code of conduct, and Under Secretary of Defense Stanley circulated a one-page memo last week instructing service members to comply with the suspension. It is unclear why, if training was unnecessary to prepare the troops for last week¹s suspension of the ban, it is needed prior the repeal of the policy. The troops already know how to interact with peers who they know to be gay and lesbian because they do so every day.

Myth #5: Repeal will increase anti-gay violence. Pentagon leaders appear to believe that some service members will react violently to the repeal of “don’t ask, don’t tell.” It is important to remember that the military environment already includes anti-gay violence. A 2000 study http://dont.stanford.edu/commentary/evaluation101.pdf by the Defense Department’s Inspector General found that five percent of the troops witnessed an anti-gay beating during the previous twelve months. Hence, the transition from discriminatory to inclusive policy will not cause the military to switch from a violence-free to a violent climate. Rather, there was anti-gay violence before the ban was lifted, and there will be anti-gay violence after the ban is lifted. If anything, research suggests that the repeal of the ban will diminish the rate of violence because victims will be better able to report trouble without fearing the loss of their careers, and would-be perpetrators will know this. 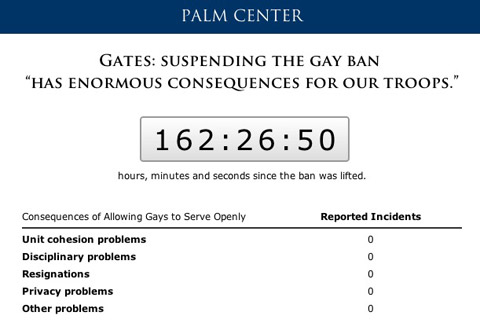 The Palm Center has launched a website, enormousconsequences.com, to track issues that have arisen since Judge Virginia Phillips struck down and barred enforcement of the military's "Don't Ask, Don't Tell" policy.

Given the prediction of short term consequences, the absence of training, and the widespread presence of openly gay troops in the ranks, Palm Center scholars decided that it was essential to begin tracking these consequences immediately.  Last week, a Pentagon official, Under Secretary of Defense Clifford Stanley, said that suspending the ban would “cause significant disruptions to the force in the short term.”  The Palm Center is unaware of any Pentagon efforts to train service members in preparation for last week’s suspension of the gay ban.  Research shows that at least two-thirds of service members already know a gay or lesbian peer in their unit.

Palm Center Director Aaron Belkin said that “Secretary Gates’s prediction of ‘enormous consequences’ is no incidental, throwaway line.  The assertion that these consequences would arise has been the justification for ‘don’t ask, don’t tell’ for 17 years.  Now that the ban has been suspended, we are searching vigilantly for such consequences, and we will use the new web site as a hub for reporting what we find.”  Last week, the Palm Center submitted a Freedom of Information Act request for all documentation of reported negative consequences of the suspension of “don’t ask, don’t tell.”

Additionally, the Palm Center is expressing concern that should Judge Virginia Phillips deny the government's request for a stay in her final ruling, expected sometime today, the government will assert that negative consequences will result because of the stay. The Palm Center says these assertions are based on recycled myths.

Those myths are outlined in a note from the Palm Center, AFTER THE JUMP…