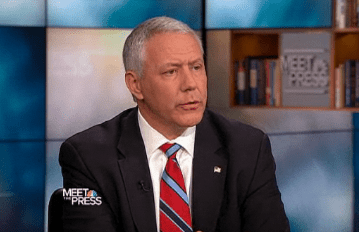 This morning, during an appearance on Meet The Press, Colorado Senate candidate Ken Buck made a blatantly homophobic remark when he was asked by host David Gregory if being gay is a choice. I'll let the transcript below speak for itself:

GREGORY: In a debate last month, you expressed your support for "Don't Ask, Don't Tell" and you alluded to lifestyle choices. Do you believe that being gay is a choice?

GREGORY: Based on what?

BUCK: Based on what? I guess you can choose who your partner is.

GREGORY: You don't think it's something that's determined at birth?

BUCK: I think that birth has an influence over it, like alcoholism and some other things, but I think that basically, you have a choice.

Sen. Michael Bennet, who was sitting beside his opponent during the show, remarked that he "absolutely believes (Buck) is outside the mainstream of views on this."

Naturally, Buck's backpedaled on his statements, post-interview. He explained afterward: "I said I thought there was some element of predisposition and I thought there was some element of choice. I not a biologist and I haven't studied the issue but that's my feeling on the issue. I was talking about predisposition. I wasn't talking about being gay as a disease. I don't think that at all. What I meant was that I think there are a variety of factors."

Watch the Meet the Press clp, AFTER THE JUMP.