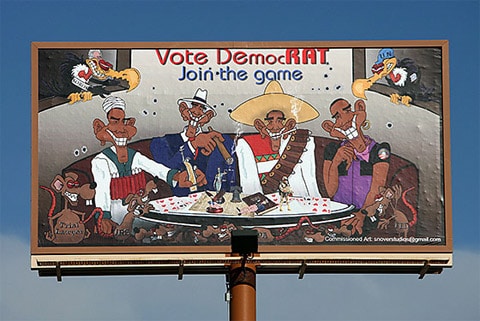 A billboard in Grand Junction depicting Obama as a terrorist, a gangster, a Mexican bandit, and a gay man.

"The billboard, erected along the I-70 Business Loop between 28 1/2 and 29 roads sometime Monday, depicts the four 'Obamas' sitting around a table with playing cards showing only sixes bunched in groups of three. Also on the table is a copy of the Declaration of Independence, a liberty bell, a toy soldier and a statue of Justice holding a balance. Beneath the Obama caricatures are numerous rats, some of which are labeled as the IRS, trial lawyers, the EPA and the Fed. Sitting above all that is a line, 'Vote DemocRAT. Join the game,' which is positioned between two vultures, one of which is labeled the U.N. and the other with the name Soros, a reference to George Soros, a major national Democratic financial supporter."