Earlier this month Vince Vaughn defended the "electric cars are gay" joke his character utters in the trailer for the upcoming Universal Studios release, The Dilemma. After receiving criticism from many, including GLAAD and Anderson Cooper, Universal axed the joke from the trailer. Now director Ron Howard is defending the joke and guess what? He's decided to leave it in the final cut of the movie, which will be released in January. 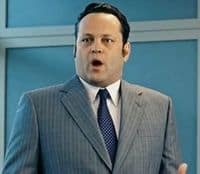 "So why was the joke in the movie?  Our lead character of Ronny Valentine has a mouth that sometimes gets him into trouble and he definitely flirts with the line of what's okay to say.  He tries to do what's right but sometimes falls short.  Who can't relate to that? I am drawn to films that have a variety of characters with different points of view who clash, conflict and learn to live with each other. THE DILEMMA is a story full of flawed characters whose lives are complicated by the things they say to and hide from each other. Ronny is far from perfect and he does and says some outrageous things along the way."

He adds: "I believe in sensitivity but not censorship. I feel that our film is taking additional heat as an emblem for many movies and TV shows that preceded it that have even more provocative characterizations and language. It is a slight moment in THE DILEMMA meant to demonstrate an aspect of our lead character's personality, and we never expected it to represent our intentions or the point of view of the movie or those of us who made it."

No word yet from Anderson Cooper but GLAAD President Jarrett Barrios issued a response immediately after hearing Howard's decision to keep the joke in the film.

“At a time when so many in our country are speaking out against the bullying of gay youth, Universal was right to acknowledge the offensive nature of this 'joke' when it removed it from trailers. Unfortunately, by leaving it in the movie, they are now contributing to the problem. The conversations started as a result of the community’s response to this slur will help schools, media and parents understand the impact of the word ‘gay' being used as a pejorative. Hopefully in the future, Universal and Ron Howard will recognize the power of their words and use their films to bring people together rather than drive us apart."