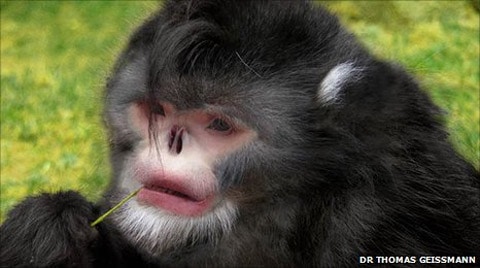 Scientists surveying an area of Myanmar have discovered a new species of monkey:

"Scientists surveying in the area initially identified the so-called snub-nosed monkey from skin and skulls obtained from local hunters. A small population was found separated from the habitat of other species of snub-nosed monkeys by the Mekong and Salween rivers. The total population has been estimated at just 260-330 individuals…Local hunters reported the presence of a monkey which did not match any description of species previously identified in the area. After further investigation in the north eastern state of Kachin, experts found a small population of previously undiscovered black monkeys with white ear tufts and chin beards, prominent lips and wide upturned nostrils. The image above is not an actual photo but a digital reconstruction based on descriptions…The new species has been named the Burmese snub-nosed monkey (Rhinopithecus strykeri)."

It's a big and very rare find. The image above is a digital reconstruction based on skin and skull evidence.