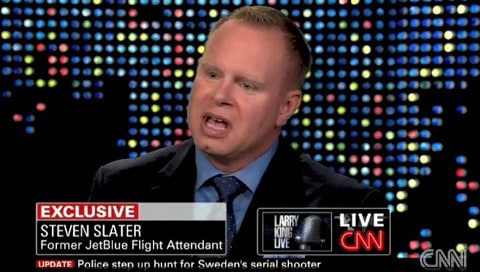 After the plane landed at John F. Kennedy International Airport in Queens, Slater said the passenger with the large bag — which had to be checked as it wouldn't fit in the overhead bin — began berating him. With the PA microphone already in hand, he said that he thanked the "respectful" passengers on board but not the woman who Slater said had called him a curse word.

Slater said he then grabbed a few beers from the beverage cart, looked outside, opened the emergency evacuation slide and slid down. He described his thoughts at the time as a combination of "pure rage" and serenity and clarity that "I didn't need to do this anymore."

Slater is writing a book, tentatively titled "Cabin Pressure", and must pay a $10,000 fine to JetBlue for the cost of repairing the chute.

Watch three segments, AFTER THE JUMP…