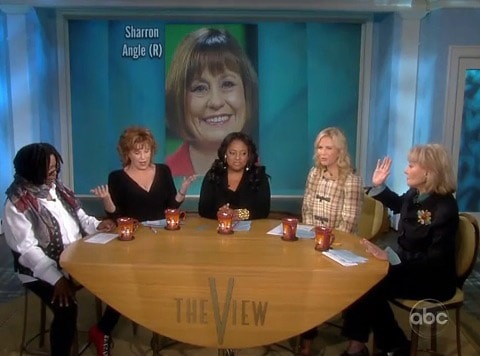 Didn't get a chance to post this yesterday. Nevada Tea Party House candidate Sharron Angle sent Joy Behar flowers and a note saying she'd raised $150,000 after Behar criticized her racist commercial and told her to bring it to the Bronx.

Says Behar: "I'd like to point out that those flowers were picked by illegal immigrants. And they're not voting for you bitch."

In related news, the HuffPost this morning pulls some audio from an Angle event earlier this month in which the teabagger laments the "wicked ways" of social programs, abortion, and gay marriage: