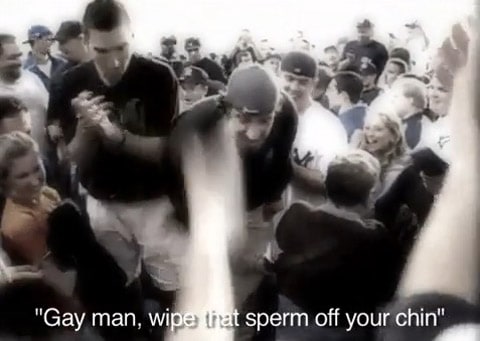 Activist Sean Chapin writes us regarding a video he created exposing ongoing homophobic chants by a New York Yankees fan group (Section 39/Section 203, aka the Bleacher Creatures) directed at fans wearing jerseys of opposing teams. The chants, which are graphic and homophobic in nature, have repeatedly been performed by the fan group at games for well over a decade. But with the recent spate of gay bullycides it appears tolerance for them may have reached a breaking point.

“I grabbed video footage from YouTube of Yankees Baseball Games where Yankees fans sing a parody of ‘Y.M.C.A.’ that demonizes gay people to fans of opposing teams (particularly one video where the person being sung to is a teenager), and used the footage to highlight the severity of homophobia that eventually trickles down to affect LGBT teenagers at our schools.  The phrase ‘Homophobia Literally Kills’ is a very recent quote from NAACP Chairman Julian Bond in response to the string of gay youth suicides.  Actions that people can participate in as show in the video include wearing purple on Oct 20 (over half a million on Facebook have signed up to do this) and calling Congress to demand the passage of the Safe Schools Improvement Act.”

Gothamist reports that the chant was being sung in the stands as recently as last week. 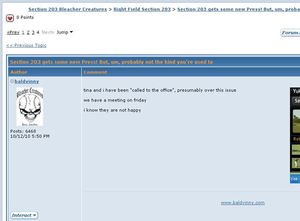 Chapin adds that a posting on the “Bleachers Creatures” bulletin board noted that Yankees officials planned to meet with the fan group this Friday in response to the chants (see inset screenshot, click to enlarge).

“it appears from an online bulletin board that unofficial leaders of the ‘bleacher creatures’ section 203 folks that has been singing the anti-gay parody of ‘YMCA’ at the Yankees baseball games for well over a decade are supposedly going to be meeting with Yankees officials this Friday, and the officials are not pleased with what’s happened.  I took a screenshot of this post (see attached), and since then, it appears that this post has been deleted when trying to access it (I wonder if those on the board deleted it for fear of being exposed for their homophobia).”

I contacted Jason Zillo at the New York Media Relations office and asked him about reports that team officials were to meet with the fan group, and Zillo told me, “I don’t have any information at this time.”

Watch Chapin’s video of the homophobic fan chant, AFTER THE JUMP…