Eugene Delgaudio, one of Virginia's most prominent wingnuts and an official on the Loudon County Board of Supervisors, is spouting off more nonsense again. 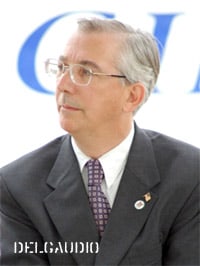 You may recall the hilarious fundraising letter that Delgaudio sent out in April for his group, the conservative non-profit organization Public Advocate of the U.S.

The letter, which warned of a "radical homosexual agenda," was also marked by passages one might characterize as homoerotic pulp fiction, Delgaudio's retelling of a visit he made to some sort of radical homosexual petition factory.

Wrote Delgaudio in the letter:

"One stormy night I drove to a mailshop hidden deep in a nearly deserted stand of warehouses. I'd heard something was up and wanted to see for myself. As I rounded the final turn my eyes nearly popped. Tractor-trailers pulled up to loading docks, cars and vans everywhere and long-haired, earring-pierced men scurrying around running forklifts, inserters and huge printing presses. Trembling with worry I went inside. It was worse than I ever imagined. Row after row of boxes bulging with pro-homosexual petitions lined the walls, stacked to the ceiling. My mind reeled as I realized hundreds, maybe thousands, more boxes were already loaded on the tractor-trailers. And still more petitions were flying off the press."

Now, this nut has sent out an email warning that TSA pat-downs are part of this "homosexual agenda".

A widely distributed e-mail written by Delgaudio for the Public Advocate about TSA, claims the pat downs are part of a "Homosexual Agenda." And he criticizes TSA's non-discrimination hiring policy.

"It's the federal employee's version of the Gay Bill of Special Rights… That means the next TSA official that gives you an 'enhanced pat down' could be a practicing homosexual secretly getting pleasure from your submission," Delgaudio wrote.

You may recall that Delgaudio fought tooth and nail against an anti-discrimination ordinance in Loudon County, labeling transgender people "it" and "real life Tootsies".

Watch WUSA9's report on Delgaudio and hot TSA action, AFTER THE JUMP…

Previous Post: « Johnny Depp: Jack Sparrow is Gay, as are All My Characters
Next Post: Watch: Ben Affleck Jokes About Gay Sex with Matt Damon »