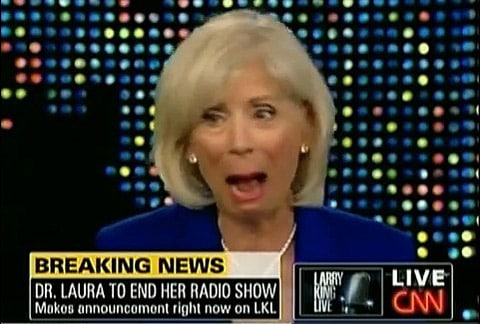 Dr. Laura Schlessinger, who said she was giving up radio back in August after her much-publicized N-word rant, has signed a deal with Sirius XM (which has previously broadcast a syndicated version of her terrestrial radio show), according to an AP report, published prematurely.

"Schlessinger will begin on Sirius XM on January 3, just three days after signing off from terrestrial radio."

Said Schlessinger in August: "Well, I'm here to say that my contract is up for my radio show at the end of the year and I have made the decision not to do radio anymore. The reason is: I want to regain my First Amendment rights. I want to be able to say what's on my mind, and in my heart, what I think is helpful and useful without somebody getting angry, some special interest group deciding this is a time to silence a voice of dissent, and attack affiliates and attack sponsors…I'm sort of done with that. I'm not retiring. I'm not quitting. I feel energized actually, stronger and freer to say the things that I believe need to be said for people in this country…I write books. I have blogs. I have my Web site…This is the area — this is the era of the Internet."

According to the report, Schlessinger's new show will be three hours long, broadcast daily.