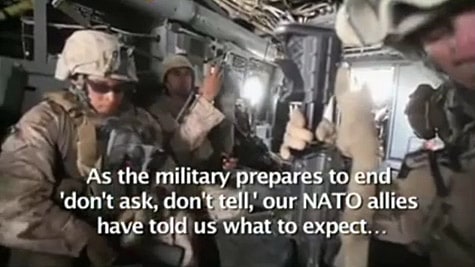 FOX News has rejected an ad advocating for repeal of "Don't Ask, Don't Tell", produced by the Palm Center. In the ad, military officials describe lifting the gay ban as a non-issue.

Said Palm Center Director Aaron Belkin in a press release: “I am surprised that Fox News would reject an ad featuring allied Generals, given that both host Bill O'Reilly and guest contributor Liz Cheney have expressed support for open gay service. This is an important time for input from all sides on this issue, and I hope Fox will reconsider.”

Says Semianiw in the ad: “There is no negative impact of having men and women of any sexual orientation fighting together, be it in Afghanistan, be it in Iraq.” Adds Willis: “The lifting of the homosexual ban was a bit like Y2K. It was a non-event, and it continues to be a non-event.”

The group intends to run its spot on other networks, Raw Story adds. Palm Center spokesperson Cathy Renna said: "The Center has submitted the ad to MSNBC and CNN and anticipates no problems."