A 15-hour police stand-off in Wisconsin over Bristol Palin's dance routing on Dancing with the Stars. 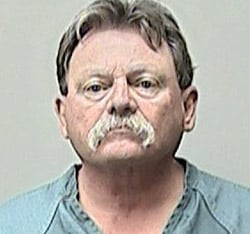 Dane County prosecutors have charged Steven N. Cowan with second-degree reckless endangerment in the incident that made his wife worry that he would shoot her, according to a criminal complaint.

Cowan, 67, and his wife were in the living room Monday night, watching the dance competition program that has featured the daughter of former vice presidential candidate Sarah Palin this season as one of the competitors.

As Bristol Palin danced on the screen, Cowan raged.

"The (expletive) politics," he yelled, according to the complaint. Cowan was upset that a political figure's daughter was on the show when he didn't consider her a good dancer, his wife told authorities.

Cowan went to his bedroom and came back about 20 minutes later, demanding that his wife find his pistols. Cowan's daughter had taken two handguns away for safety reasons, according to the complaint.

Cowan had tracked down a single-shot shotgun in the house, he "slapped" bullets down onto a TV tray, loaded a round and took out the TV, the complaint says.