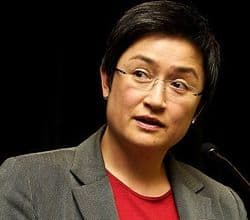 Senator Wong has been criticised in the past for putting her role as a cabinet minster ahead of her personal views and declining to support gay marriage.

At the state conference, she said she knew what it was like to be the subject of prejudice.

''I have had the opportunity to advocate for equality at the highest levels of our party and within our party processes, as I do today,'' she said. ''And I will do so at the next national conference. Talking about change is not the same as delivering it.''

Alex Greenwich of the Australian Marriage Equality points out the significance of her announcement: "Senator Wong's public support for reform will not only make a difference when the issue is debated at the Labor national conference – it also reinforces the message to the Australian public that gay Australians are united in our desire for full legal equality."