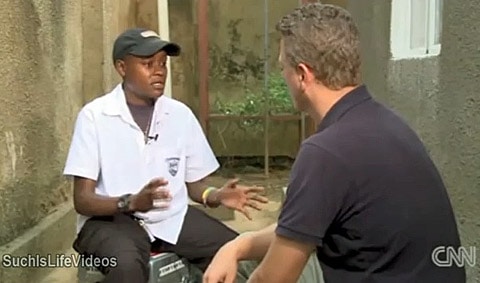 Early in October, the Ugandan tabloid Rolling Stone published a cover story outing "100 Top Homos" and called for their hanging. The story, which made headlines internationally, inspired documented attacks on many of those named in the article and sent many others into hiding. 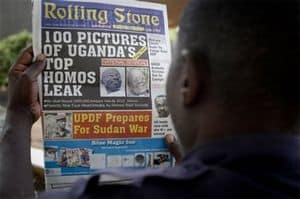 A Ugandan anti-gay newspaper on Monday published pictures of 14 men it identified as gay, in a country where homosexuality is illegal and has even prompted calls for the death sentence.

The lead article in The Rolling Stone newspaper, which has no relation to the US magazine, entitled "Men of shame part II," pictured 14 men identified as the "generals" of the gay movement in Uganda.

"They published their pictures on a gay networking website, so that was enough evidence for us," editor Giles Muhame said, adding that the paper did not try to contact the men before publishing their pictures.

The newspaper, which lost its license last month but published the news issue in defiance of the ban, told AFP that the alleged gays it named have been involved in "brainwashing" youth into homosexuality, but its editor said it had no evidence to back that up.

CNN spoke to Giles Muhames, the editor of the Rolling Stone tabloid, who says homosexuality is a "virus", and Stosh Mugisha, a lesbian who is now in hiding after being outed by the article.

"Ugandan activist Jacqueline Kasha reports that alongside Rolling Stone and Red Pepper another Kampala newspaper 'Onion' has now joined in with the 'outing' campaign. Kasha and fellow activists David Kato and Patience Onziema have launched an action in Uganda's High Court this morning suing Rolling Stone for incitement to violence. American activists citing the role of US evangelicals in the anti-gay witch hunt underway in Uganda are calling on the US State Department to immediately offer visas to those 'outed' and under threat."

Just last week, David Bahati, the sponsor of Uganda's "kill the gays" bill, said he felt assured it would pass soon. He expressed that again to CNN.