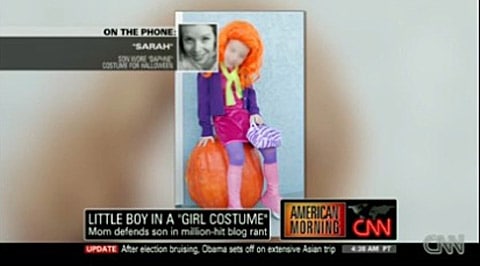 Sarah, the Missouri mom whose blog post about her son dressing as Daphne from Scooby Doo went viral over the past few days, spoke to CNN about her blog post.

She was also scolded for "outing" her son by psychologist Jeff Gardere, who says it's the "worst nightmare" of both heterosexual and gay couples "to have to fathom that their child might be gay."

How do you gay parents feel about that?

Sarah, who seemed caught off-guard by Gardere's admonition, first explains that gay also means "happy" but then goes on to tell off Gardere, explaining that if you read her post she says he might not be gay, but even if he was, she'd love him anyway.