Those of you in the Bay Area can catch a new documentary tomorrow night on Oakland A's player Glenn Burke, who came out publicly after his baseball career. 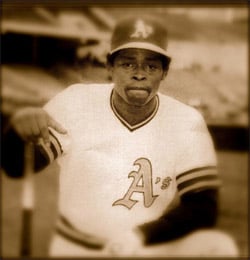 "Burke made little secret of his sexuality during his time with the Dodgers and A's in the late 1970s. Several former teammates contend this bothered management of both clubs, to the point where the Dodgers traded Burke to Oakland and then-A's manager Billy Martin later ridiculed him in front of his teammates. He abruptly retired from baseball in 1980, publicly revealed his homosexuality two years later and landed in San Francisco's Castro district, where he initially was welcomed warmly. But his life there eventually spun out of control, sending him spiraling toward drug use, prison time and AIDS. He died of complications from the disease in May 1995, at age 42."

The documentary airs on Comcast SportsNet Bay Area at 8pm to coincide with a fundraiser at the Castro Theatre. At 9:15 p.m., a live town-hall meeting at the Castro will be telecast on CSNBA.