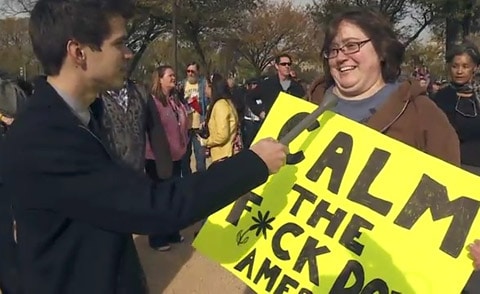 While participants attended for a variety of reasons, many of them raised concerns about the deteriorating state of news media, especially the hyperbolic and hyperpartisan content of 24/7 cable news networks.

Many of those who expressed concerns nonetheless cited partisan news outlets as their primary source for news, while others cited The Daily Show, something Mr. Stewart has discouraged.

Not a single participant listed their regional newspaper as a source for news, and it was telling that the majority of the people we spoke to were unaware of the details of the elections in their congressional districts (this despite many of them having already voted.)

If an intention of the "Rally to Restore Sanity" was to dissuade people from voicing divisive and paranoid political accusations, it was not enough to deter the fringe. In lieu of the Birthers common at Tea Party events, there was a small presence of 9/11 Truthers who accused the Bush administration of orchestrating the 9/11 attacks. (Doubtless, these flimsy conspiracy theorists will infest the comment threads in needless defense.)

But for the most part, the rally represented a congenial gathering of center to center-left people who are opposed to ideological purity tests and uncompromising dogmas, and who focused their blame on the divisive media coverage of political issues.

Previous Post: « Watch: Priscilla Queen of the Desert Cast Says ‘It Gets Better’
Next Post: Listen: Ricky Martin’s New Song ‘The Best Thing About Me is You’ »