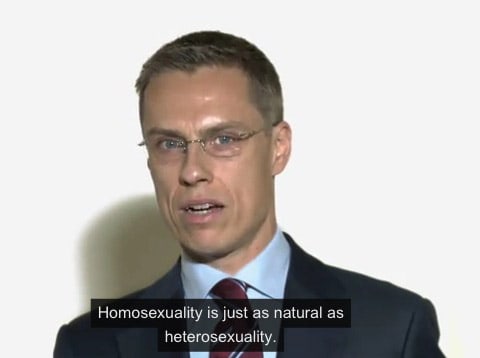 Dan Savage’s phenomenal ‘It Gets Better’ campaign continues to expand its reach.

Here’s a video created at TEDx Helsinki, which includes not only Finland’s Next Top Model winner, but the country’s Foreign Minister Alexander Stubb (above) and Justice Minister Tuija Brax (in purple coat).

Writes Tommi, who appears in the still for the clip:

“The response to the video  has been amazing. In the premiere the audience of TedX Helsinki gave it a standing ovation. The president of the republic has mentioned it in her speech. In two days it has gathered 41 000 views in a country of five million. It’s been shown in dozens of schools followed by a debate. All main TV stations will show it in full, which means that millions will see it. We got a publishing deal for a It Gets Better book, which will come out for the Christmas market.”