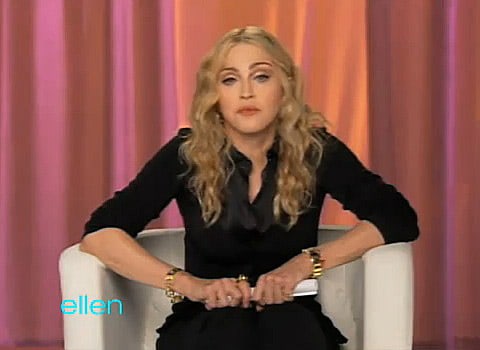 Here's a brief clip from an appearance Madonna makes on Ellen DeGeneres' show today to discuss anti-gay bullying and suicides.

Watch Madonna's appearance, AFTER THE JUMP…

Says Madonna to Ellen, when asked how she speaks to her own children about bullying:

"We talk a lot about the importance of not judging people who are different. Not judging people who don't fit into our expected view of what's cool and what isn't. The concept that we are torturing teenagers because they are gay. It's kind of like I said earlier. It's unfathomable. It's like lynching black people or Hitler exterminating Jews. Sorry if I'm going on a rampage right now but this is America. The land of the free and the home of the brave."

Madonna says she can relate to bullied kids:

"I can totally relate to the idea of feeling isolated and alienated. I was incredibly lonely as a child, as a teenager. I have to say I never felt like I fit in in school. I wasn't a jock. I wasn't an intellectual. There was no group that I felt a part of. I just felt like a weirdo…It wasn't until my ballet teacher who was also gay took me under his wing and introduced me to a community of artists of other unique individuals who told me it was good and okay to be different and brought me to my first gay disco and ironically made me feel I was part of the world and it was okay to be different."

Watch Madonna's appearance, AFTER THE JUMP…