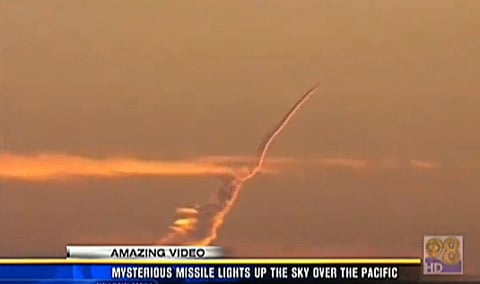 A missile was launched off the Southern California coast last night. Nobody will say who fired it.

"When asked, however, what he thought it might be, the former ambassador said it could possibly have been a missile test timed as a demonstration of American military might as President Obama tours Asia. 'It could be a test-firing of an intercontinental ballistic missile from a submarine … to demonstrate, mainly to Asia, that we can do that,' speculated Ellsworth. Ellsworth said such tests were carried out in the Atlantic to demonstrate America's power to the Soviets, when there was a Soviet Union, but he doesn't believe an ICBM has previously been tested by the U.S. over the Pacific."

Previous Post: « Watch: Madonna Speaks to Ellen About Anti-Gay Bullying
Next Post: Barney Frank: LGBT Legislation Has ‘No Chance’ of Passing Next Year »