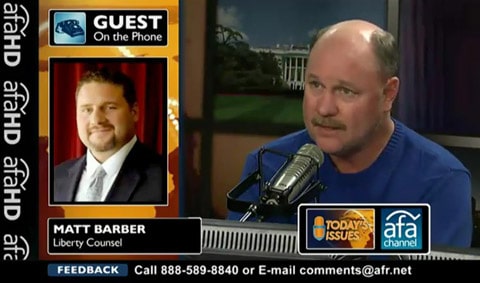 Says Wildmon: "You don't put openly homosexuals with a bunch of straight guys, a bunch of red-blooded…. you don't do that, in the same way you wouldn't put a woman in a shower with a man in the military. There's sexual tension."

Barber responds, citing some bizarre statistic that 24% of soldiers would leave if DADT were lifted, says "socialist" Obama wants to create "a petri dish for radical San Francisco-style social experimentation."

Scaring conservatives with the "ick factor" of gay sex is really all these two have left.