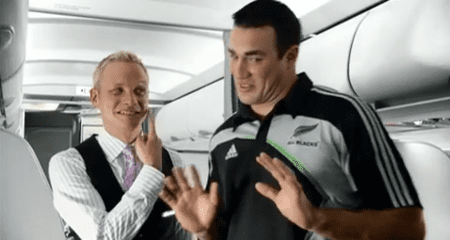 Due to mounting pressure, Air New Zealand has decided to cut a scene from a lighthearted in-flight safety video wherein a rugby player refuses to kiss a male flight attendant on the cheek. A representative for the airline says that higher-ups discussed the scene before production and after initially finding no problem with the scene, decided to include it in the video. They have only recently started to receive complaints about concerns over homophobia. So far, the video has been seen by about 2 million people since since it was released a few months ago.

One person not offended by the scene is the male flight attendent featured in the video. He said: "I'm absolutely gutted that a couple of people in the gay community have ruined this for everyone else. I'm proud to be gay, proud to be an Air New Zealander and extremely proud of my role in the safety video. Obviously there are some people in the gay community that can be a little precious and need to lighten up. If anything this particular scene shows a bit of light hearted humour about the situation."

Watch the unedited in-flight safety video for yourself, AFTER THE JUMP. The scene in question comes in at the 2:49 mark.