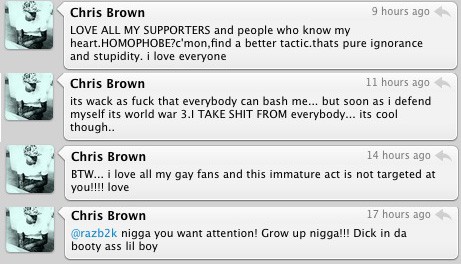 Following a homophobic Twitter tirade inspired by a tweet directed at him by former B2K member RazB, which said, "Im just sittin here Thinking how can n**gas like (Eric Benet) and (Chris Brown) disrespect women as Intelligent as Halle Berry, Rihanna," Chris Brown posted a series of defensive tweets yesterday, saying that he loves his gay fans, and that his homophobic language was not directed at them.

And then it all ends with a death threat.