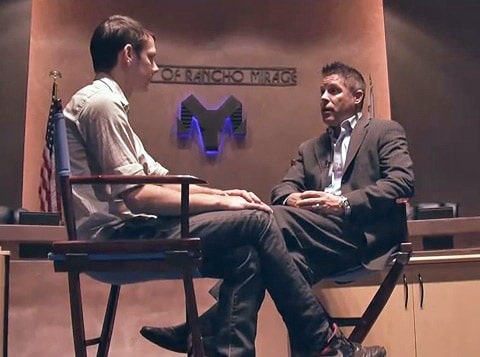 Nathan Manske and Marquise Lee are halfway though a 3 month trip around the United States collecting stories for their I'm From Driftwood site. We're finally ready to start catching up with some of the stories collected over the first half of the trip along with some of the insight into what they're seeing now. Anyone can submit their own story via IFD.

We had made our way to Palm Springs, CA, a gay mecca in the middle of the desert, where it supposedly rains only 7 days out of the year. As our weather luck, or lack thereof, would have it, the rain fell and fell some more for the entirety of our only full day there, flooding most of the streets in the flat terrain. But our spirits wouldn't be dampened because we would soon be getting a story from Scott Hines, the openly gay city councilman of nearby and much-more-conservative-than-you'd-think Rancho Mirage.

The rain had finally stopped the next day but the streets were still flooded. After navigating and hydroplaning our way to Rancho Mirage, we met Scott at City Hall. My first impression was how handsome he was and how firm of a handshake he gave. I quickly went from swooning to fuming, however, after hearing his story about gay adoption and the sacrifices his family had to make because of anti-LGBT adoption laws in his previous home state of Tennessee. Of course I support gay adoption, of course I'm against anti-gay ballots and measures and propositions and referendums, but until you put a face or a person or a story with an issue, it's just an ideal. Meeting Scott and hearing about his family made it personal. I hope it does for other folks as well.

Additionally, the IFD boys arrive in NYC this weekend. The crew will be having a Reading Event+Screening on Friday, December 10 at the LGBT Center on 13th St., Room 310. They will talk about their adventure on the road as well as show some of the Video Stories they've collected. There will be a live story reading by NYC native Jay Blotcher and an introduction by OutQ Radio Host Michelangelo Signorile.