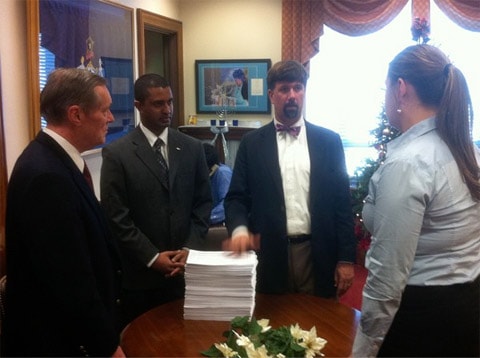 Moments ago, Organizing for America delivered more than a half million petitions urging repeal of 'DADT' to Senator Susan Collins of Maine, whose demands regarding debate and amendments on the Defense bill have thus far been the sticking point to a vote moving forward.

Greg Sargent at the Plum Line says Harry Reid has not yet responded to Susan Collins' offer of a15 amendments. The implications of this are not immediately clear, but certainly not positive, writes Sargent:

Guess what: Reid has yet to respond to her offer, according to a spokesperson for Collins. "As of this morning, Senator Collins has not received a response from the Majority Leader," the spokesman, Kevin Kelley, tells me.

The Senate being the hall of mirrors that it is, we can't be too sure what these latest developments mean. Perhaps Reid has simply decided to call Collins's bluff by holding the vote now without responding to her latest offer, in the belief that she's not negotiating in good faith and needs to be forced to vote and show her cards. But if Reid doesn't meet Collins's demands, it seems likely that repeal will fail.

Of course, in the Senate, things can always rapidly change, so all this could be moot within the next hour. More when I learn it.

The Human Rights Campaign is warning not to rush the vote:

Fred Sainz, a spokesman for Human Rights Campaign, said in a statement, “If senators move forward with a vote on NDAA before a deal has been solidified, the vote will fail and all key players will share the responsibility.”