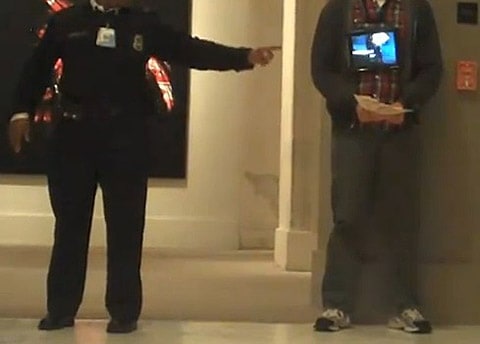 A clever, if short-lived, form of protest against censorship.

A demonstrator against the Smithsonian's shameful censorship of the David Wojnarowicz video art piece "A Fire in My Belly" (I wrote about it here) wears the art piece on an iPad around his neck and distributes flyers to visitors telling them about the museum's caving to the Catholic League. 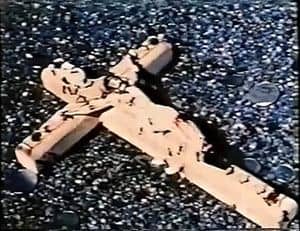 As punishment for their protest, the activist wearing the iPad and the activist filming it were banned from the museum for life.

Smithsonian spokeperson Linda St. Thomas says that the banning was entirely the business of the DC police. Smithsonian security officers, she says, have no authority to issue such a ban. She believes the protesters' offence was leafletting, which is banned in Smithsonian buildings, and often becomes an issue when political protests on the Mall spill over into its museums: "It doesn't matteir what the cause is, you just can't bother our visitors that way."

St. Thomas admits, however, it's not clear that Blasenstein was guilty even of leafletting: "You're not supposed to hand [leaflets] out, but you can walk in carrying them," she says. (The video shot by Iacovone, and now widely available on the Web, seems to confirm that Blasenstein was entirely passive.

Watch the iPad protest, AFTER THE JUMP…