All 42 GOP Senators have signed a letter from Mitch McConnellto House Majority Leader Harry Reid threatening to block all initiatives, including the Defense Authorization Act with DADT attached, until Republicans get their way on Bush tax cuts. 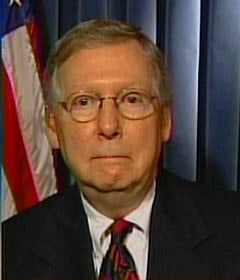 Excerpt from letter from GOP Senators to Harry Reid, via The Plum Line:

The nation's unemployment level, stuck near 10 percent, is unacceptable to Americans. Senate Republicans have been urging Congress to make private-sector job creation a priority all year. President Obama in his first speech after the November election said "we owe" it to the American people to "focus on those issues that affect their jobs." He went on to say that Americans "want jobs to come back faster." Our constituents have repeatedly asked us to focus on creating an environment for private-sector job growth; it is time that our constituents' priorities become the Senate's priorities.

For that reason, we write to inform you that we will not agree to invoke cloture on the motion to proceed to any legislative item until the Senate has acted to fund the government and we have prevented the tax increase that is currently awaiting all American taxpayers. With little time left in this Congressional session, legislative scheduling should be focused on these critical priorities. While there are other items that might ultimately be worthy of the Senate's attention, we cannot agree to prioritize any matters above the critical issues of funding the government and preventing a job-killing tax hike.

We look forward to continuing to work with you in a constructive manner to keep the government operating and provide the nation's small businesses with economic certainty that the job-killing tax hike will be prevented.

However, Greg Sargent says that there's a good possibility that certain GOP Senators would abandon McConnell on this:

"Senator Susan Collins confirms to me that she could still vote for cloture for the Defense Authorization Bill containing repeal of DADT if ample time is alloted for floor debate and amendments…This wouldn't be the first time a tactic like this from McConnell has failed to maintain GOP unity, despite his threats to the contrary. On Wall Street reform, Dems were able to break the GOP filibuster despite McConnell's bluff…Someone should ask senators Richard Lugar, Olympia Snowe, and John Ensign whether they are willing to rule out a vote for DADT repeal if the Bush tax cut standoff isn't yet resolved. My bet is their answers might be surprising."